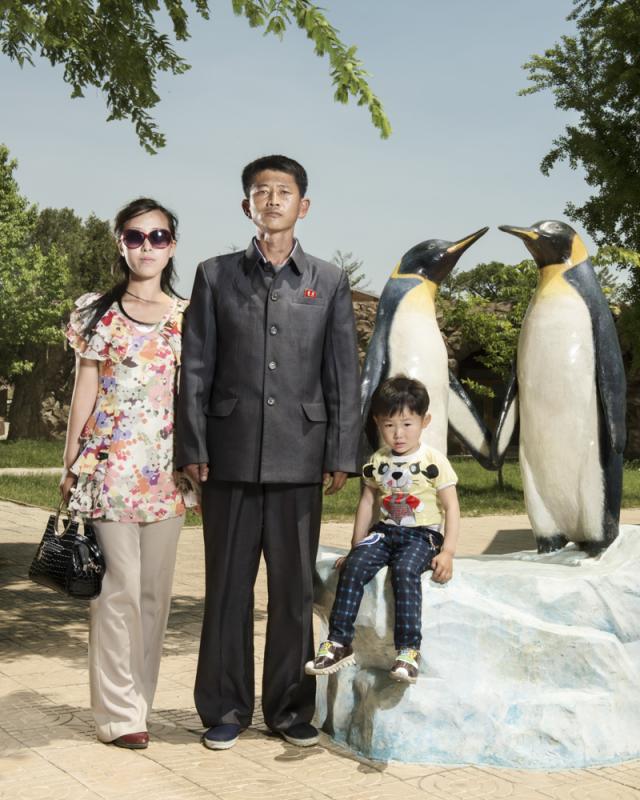 I’ve alway dreamed of visiting North Korea, of being permitted to see for myself what goes on in that opaque nation, so poorly known and widely despised. Since its creation a half-century ago, North Korea has restricted access to its territory as a tool to limit and control what is known about it. War, famine, dissidents, the nuclear program…over decades, mystery has become an obsession. I wanted to assess not merely what is true or false, but the immensity of what is hidden. I wanted to encounter these 25 million men and women made invisible by the propaganda of a dictatorial dynasty. I wanted to understand. And I was convinced that the people were a key element in penetrating the North Korean enigma. I went to North Korea to see behind the facade with my own eyes and offer this insight to others. And the portrait became key. The portrait is a symbol of the democratic era, the veritable representation of the self. While the painted portrait was a privilege of the bourgeoisie, the photographic portrait made self-representation available to all. In North Korea, public iconography is in thrall to propaganda, and usually takes the form of painted frescoes or ceramics depicting icons of the regime. In interiors, portraits of the regime’s founder, Kim Il Sung, and his son, Kim Jong Il, are obligatory and exclusive; family or personal portraits have no place. The individual does not exist. While in the West the photo portrait emerged from the interface of photographic technologies and the rise of individualism, in North Korea collectivism militates against any form or concept of private self-expression. Even before I leave, I know that I will be accompanied every step of my journey by a minder. I know in advance that the creation of this photographic series will depend on my rapport with my hosts. Unable to speak the language or to set my own itinerary, I know I will have to create a free space within the constraints imposed upon me. How can I reconcile my vision and my Western-oriented perspective with the viewpoints of my hosts? Encountering random passers-by at the sites where I am allowed to visit, how will I connect and gain tacit permission to shoot their portraits without compromising them? What are the codes, situations, profiles they will consider presentable to my lens? They would have to find in my work comprehensible, acceptable points of reference. Given cultures and mentalities so different, it would often take intense effort to understand one another. I chose the mirror-style portrait, shooting the subject from a straight-ahead angle, as if collecting data for an anthropological study. I hoped to humbly follow in the footsteps of the scrupulous August Sander, who managed to combine documentary photography and aesthetics. In his portraits, the light is flat, the perspective straight-on, the gaze direct; the frame hardly varies. The model occupies the portrait, grooms his or her appearance at will. The photographer does not try to surprise or impose. The caption says little, merely indicating status and guiding the gaze to the image. The North Koreans have a fraught relationship with images of themselves. They are somewhat taken aback, given the novelty of anything subjective in their culture. Their uncertainty is apparent with every click, and exacerbated by the fact that I am a foreigner, a European. The frontal pose and straight-ahead gaze are congruent with their customs of photography, usually reserved for specific situations such as work or marriage, and always meant to reference something beyond the individual personality. The rigorous staging of these portraits, often full-length, resembles, to their eyes, the propaganda image, so familiar and comprehensible. The lighting echoes the fierce desire to magnify and beautify any pictorial representation. The portrait has become a tool of social control, and the photograph validates one’s identity, the congruence of one’s sense of self and a physical image. I become, then, something that is understood and predictable, even reassuring. Still, I quickly realize that, even side-by-side during a photo shoot, we aren’t seeing the same thing. This is both fortunate and the main source of conflict. As Plato said: “You have surely noticed that the face of one who stares into the eyes of another is reflected, as in a mirror, in those eyes: it is the image of the one looking.” How better to say that the portrait is an intimate mirror in our relationship to the other. In its varying points of view⎯the model, the photographer, the spectator⎯this series will doubtlessly reflect back to us some of our own self-image, and perhaps permit us to see the North Koreans in their own eyes.